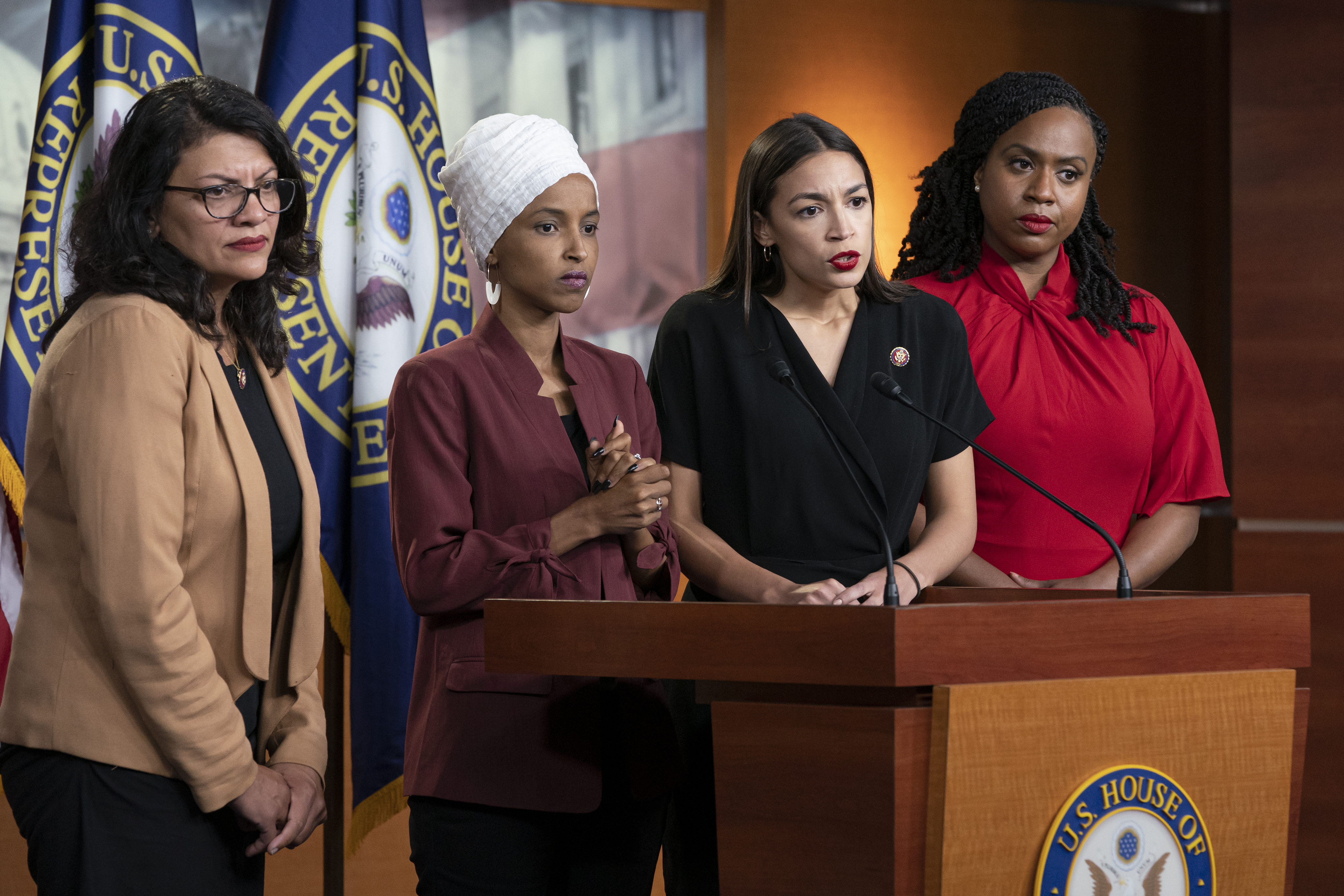 In case you've been under a rock for a couple of days, there's been a big brouhaha over Trump digging into his bag of evergreen racist tropes, and telling the 4 young freshmen congresswomen (all women of color) to "Go Back" to the countries they came from.  No matter that 3 of them are native-born citizens, and the other a naturalized citizen since 2000.  If you don't know Trump is a racist by now, go talk to someone else.  I'm not here to break the news on that story.

In one of those tortured explanations for why Trump is not a racist, House Minority Leader Kevin McCarthy, a Republican, told reporters today: "I believe this is about ideology. This is about socialism vs. freedom."  Fortunately, there was someone not asleep at the wheel to call him out on this worse-than-sophomoric statement.  Steny Hoyer (D-Md.) quickly shot back "That's baloney. It has nothing to do with socialism,"

At first, I just thought this was just another case of someone who didn't pay attention during 8th grade civics class.  We're all supposed to know that a term like Socialism belongs in the group of descriptions of economic systems, which are separate from governing systems which is where we talk about "freedom." Most of right-wing logic is usually that flawed and simplistic, but as I thought about it, it seemed like something more.

In this age of Citizens United, where corporations have the same rights as people,  I think the "freedom" McCarthy may be thinking of is the freedom of capital, the freedom for money (or people with money) to do whatever it damn well pleases.  In that way, the "Socialism vs. Freedom" thing actually makes a certain perverse sense.  Trump and his class see democracy as a problem.  It allows ordinary people to get in the way of capital.

If I had to bet a dollar, I'd say it's a pretty safe bet that Trump is indeed a racist, for real.  But, you could make a case that he's not, he's just so greedy and selfish, that he doesn't mind appealing to people's fears, and uses racism to achieve his goals.  I'll leave that to others to figure out!

Oh, and one more thing, I think it's kind of ironic that the one congresswoman (Omar) who wasn't born in the US is from Somalia, often referred to as a "Libertarian Paradise!"
Posted by Geoff Gould at 7/16/2019 10:17:00 PM

I think your points are very well made. Of course he is a racist, on a grander scale than most given his prejudice extends to anyone who doesn't meet his needs, and in some ways like everyone else when taking into account the innate human sensitivity to "different from me" (albeit without the consscience to recognize and attempt to rationally overcome this inherent bias in accordance with higher-order values and rational thought).

What disturbs me most is how the Democrats keep taking the bait - making it into a personal pissing war and sinking to his level, rather than talking to the people about what it really means to be an American, the importance of civiity,courtesy, and respect, and most assuredly, what it means to have Christian values. Obama spoke to the people about these things and let them make the decision, showing faith in the masses. Hillary was too much the other side of the same coin - name calling and shaming does not work. Appeal to the people's sense of fairness, and of right and wrong; don't let them bypass their consciences by thinking they are simply choosing sides in a dumping contest. Explain policies, their rationales and costs, in depth, not in sound bites. And once again, have a little faith...


While somewhat interesting, your post strikes me as quaint and beside the point.
Who do you think you're addressing? Definitions, policy, facts, reality -- if
you haven't been paying attention for the past twenty-five years, surely the
last two years have amply demonstrated that these things have no connection to
Republican talking points. At his rallies, The pResident himself has literally
stated that Democrats/liberals hate America and want to destroy it. In the face
of such extremist rhetoric, do you think nuances about the correct definition of
socialism makes any difference? No matter who is eventually nominated by the
Democrats, no matter how centrist or even conservative their positions, they will
be branded as "socialist" or worse by Faux News and right-wing hate radio. The
Republicans have decended into madness, and no amount of logic or reason can cure
their insanity.

Thank you for reading, and taking the time to comment. I was trying to avoid a long, tangled screed, so I was indeed focusing on a small, simple idea. I was merely trying to connect the personification of money with other trends like Citizens United and the old socialism clichés. I'm going to go back and re-read my post, to see how I might have not made my simple idea simple.
Thanks,
Geoff