The line it is drawn The curse it is cast
With the election of Barack Obama, a major battle has been set up. Obama's victory was never accepted by the corporate forces who have done such a great job of locking up the game that is called The United States. Rather than wait for the mandate to be given a chance, the strategy has been to simply stall and obstruct. The U. S. Treasury was so heavily looted, there's very little money, if any, left for creative social justice programs, which suits the right just fine. The GOP's seditious strategy cares not for the general welfare of the country (or the world for that matter), but only serves at the pleasure of moneyed interests. The demons of racism, sexism, and xenophobia have all been unleashed in support of the attacks on the new Federal government. FauxNews' Glenn Beck and his ilk continually stir up these forces, in a thinly veiled hope that some wacko will take Obama out of the picture.

What is happening is a race between the country becoming aware of the good works of Obama's plans, and the heavy indoctrination/disinformation program of the right wing. Normally, this would have been hard enough, but with the Supreme Court's recent decision to allow corporations unlimited 'free speech,' the stakes have gotten higher.

The Bizarro World of California Voter Democracy - 1984-style
California's initiative process has been flawed for years, with corporations able to hire professional signature gatherers for self-serving propositions. But it seems as if the 'gloves are off' now. I have noticed a few propositions that seem particularly obvious examples of corporate self-interest:

Prop 16 "Taxpayers Right to Vote"
Perhaps you've seen the ad on TV, telling you how this will give taxpayers the right to approve any public involvement in power generation. Watch closely, in the middle of the ad, the voice0ver says it "requires voter approval" while on screen the truth is highlighted; it would require 2/3 majority to approve any such move. Anyone familiar with the budget process in California since the 2/3 majority has been needed to pass a budget knows this is just a big roadblock. The only funding for this awful proposition comes from PG&E. Surprised? Somehow we are supposed to forget the whole concept of representative government. We elected people to do that job, but for some reason, we are expected to micromanage everything with a ballot proposition? We have a right to vote, we elect representatives. Why can't they do their jobs without the corporations always stepping in and paying for so-called 'voter initiatives' to get their way?

The Good Side: Motorists can get 'continuous coverage discounts' even when they switch from one insurance company to another.
The Bad Side: If for some reason, a motorist lets coverage lapse, then the next time they need insurance, no discount. This would not just be for people who didn't pay their bills. What about someone who sold their car because they didn't need it? Why should they be penalized?
Who's paying for this 'voter initiative?': The primary sponsor of Prop 17 is Mercury Insurance. Surprised?

So, in the whole health care reform process, we found that lots of congressmen and senators were basically on the take from corporate interests. And on a certain level, who can blame them? They can't get re-elected without financial support. So, even though the majority of the American people wanted relief from the onerous mess that is our current health care system, we hear all about 'socialism' and 'government takeover,' 'death panels,' and blah blah blah. Now we're hearing about how the GOP will win a lot of seats back in congress. What sort of disconnect is that?

The race against time that I'm referring to is trying to hold on to the effort to clean up our power structures before they become totally corrupted. George W. Bush has already appointed relatively young Supreme Court justices who will tow the corporate line; they won't be replaced for another 20 years! We need leaders like Obama to stay in power long enough to turn this rotten ship around.

Keep your eyes on the prize, and don't be distracted by flashy baubles! 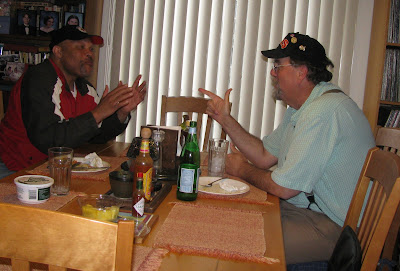