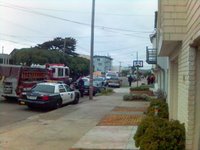 Earlier today I was wrapping up what I figured would be my last blog post before the end of Spring Break, and I noticed there were a couple of fire engines and a bunch of police cars just a few doors down the street. It was a slow day, and I wasn't properly dressed, so I just poked my head out the front door to see what was going on. I didn't really know what was happening until later, when a neighbor rang my doorbell.

What I was told was the stepfather of a girl my daughters had grown up with had died by suicide. I was pretty floored, and remembered when this girl's father had died of a heart attack over a decade ago. The heartache was huge.

I don't have anything clever to say here, but would like to call on the small community of people that read these musings to share what they know about suicide. Is is something that takes over a person suddenly? Should anyone have seen this coming? The family is completely at a loss to explain why this happened. So, please consider sharing your experiences or knowledge about this tragic subject. 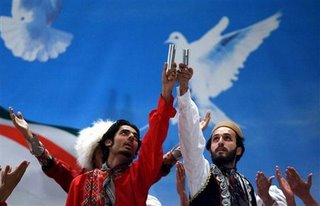 This must be a dream.
[I just couldn't resist working this photo of the dancers into a blog!]

Here we see Iranian dancers at a ceremony, supposedly holding capsules of UF6 in their unprotected hands. I have nothing against Iranians, my mother was born in Tehran, and I have found most Iranians I've met in my life wonderful people. But I can't believe this image of heroic dancers lifting a vial of poison in the air, with a backdrop of white doves, doesn't land just a little oddly with most Iranians. It's like a cross between some old Soviet-era propaganda poster and a Coke or Pepsi commercial. What was the Pepsi revolution all about anyway?

So, without further irony, or tounge-in-cheek:

at an April 11th ceremony:
"At this historic moment, with the blessings of God almighty and the efforts made by our scientists, I declare here that the laboratory-scale nuclear fuel cycle has been completed and young scientists produced enriched uranium needed to the degree for nuclear power plants Sunday," Ahmadinejad said.

"I formally declare that Iran has joined the club of nuclear countries," he told an audience that included top military commanders and clerics in the northwestern holy city of Mashhad. The crowd broke into cheers of "Allahu akbar!" or "God is great!" Some stood and thrust their fists in the air.

Can George W. Bush's scripted speeches in front of soldiers, extolling how he is bringing freedom to the Middle East, seem any less bizarre to Iranians than this scene may look to some of us?

Which title sounds better to you? "Undocumented Worker" or "Illegal Alien?"

When you watch the news, count how many times you hear each phrase. Which one do you think strikes more fear in the average TV viewer? There are a lot of conflicting truths, but I rarely hear a word about the "Illegal Employers."

The other night, Jesse Jackson was the guest on the faux-news "Colbert Report" and was being hammered by Colbert's right-wing persona about immigration. What Jesse kept saying was that "these people were sent for." If you think about it that way, it seems kind of odd to only blame the "illegals" and not the people who provide the jobs to bring them over here. I'm not saying it's OK with me to cross a border without permission. Until the day comes when every world citizen has the same rights as privileges, borders are a practical necessity. I just find some people's indignation about immigration a little odd, when they are probably not that removed from someone who hires a gardner, nanny, or cook. We all probably have a favorite restaurant we like to go to, and we probably don't think too much about who's working in the back, cleaning the dishes, and cooking our food.

American citizens work abroad, but we don't expect them to behave like they're not Americans. But somehow when we ask people to come work here, we also want them to wave American flags too. Today, at major demonstrations, the word was put out to demonstrators to put away the Mexican flags, and only wave US flags. A smart, if somewhat cynical move.

In the last dozen years or so, we have become used to a low annual inflation rate, but at what cost? We buy lots of cheap items made in China. Are we willing to pay American citizens to do the same work as those Chinese? If we make the Mexican workers apply for citizenship, pay taxes and fines, and learn English, how much more will we have to pay to have the leaves blown off our lawns?

This is much more complicated than any 40-second news bite can swallow. Do undocumented workers take American jobs? Definitely. Do they also use public services such as health care? For sure. But once again, this reminds me of the burden the employers are shirking, just like the de facto reality of Wal-Mart. Wal-Mart pays their workers so little, that that the employees can't afford healthcare, and end up using the public emergency services for their health care. The public picks up the tab for Wal-Mart that Wal-Mart should pay. In the case of the illegals, we all pick up the tab for their services that should be paid by any conscientious employer.

No wall can be built high enough to keep people out who are 'being sent for.' If we can stop illegal hiring, the number of illegal aliens would shrink dramatically. That is, of course, if you're willing to pay a little more for a head of lettuce.
Posted by Geoff Gould at 4/10/2006 07:30:00 PM 3 comments: