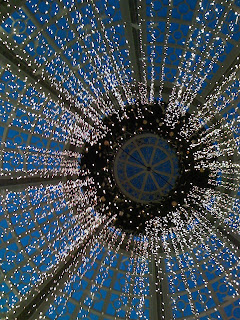 Shopping as Entertainment
[picture at left is straight up view of rotunda dome, with lots of strings of holiday lights hanging down.]
I have generally escaped contact with the mass consumerist culture this Christmas Shopping season (last minute shopping for chocolates for Martha's xmas stocking are hopefully forgiven!) but as we headed out today to do some errands, and a little grocery shopping, we somehow ended up downtown at the Westfield Mall, home of San Francisco's Bloomingdale's, which is housed in the ghost of the old Emporium.

In many ways, a mall is a mall is a mall, but this one has some dramatic uses of space. The rotunda itself towers over a third floor rest area with chairs and couches, and the string of lights are positively mesmerizing. Some of the views from above down at the lower levels certainly evoke a sort of vertigo I don't usually feel. The food court on the bottom floor had way too many choices, and it took forever to settle on a 'safe' choice of fish and chips (pretty decent). We even got our grocery shopping done there; there's this real upscale grocery store, Bristol Farms, on the same level as the food court, which is an entertainment in itself. It out-Andronico's Andronico's! I even found a little wedge of goat's milk Bleu Cheese for Jeff and Karen's NYE party!

We ended up staying too late, and got locked out of the rear exit where we came in, and had to truck our groceries around the block, but survived. It gave us an opportunity to look closer at the clever xmas windows of Fox Hardware, at their chandelier made from colanders, wire whisk wheels, and other hardware parts!

Walking through the building brings up old memories: My sister Rickie and I shopping with our Grandma; taking my own kids (many years later) to Legoland during the Christmas season. My dad was an architect, now and then, and sometimes I feel a certain shared appreciation for buildings. I don't really know, as we never waxed philosophically about such things.

I feel kind of guilty, as I generally feel people who like to go to malls are like people on sitcoms, but to paraphrase Pogo,

I have met the shopper, and he is me!