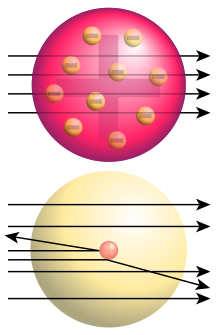 A Science Nerd's Analogy
Back in 1909, Hans Geiger and Ernest Marsden, under the direction of Ernest Rutherford at the Physical Laboratories of the University of Manchester, performed an historic experiment. In an effort to deduce what the inside of an atom 'looked like,' they fired small helium nuclei, alpha particles, at a thin layer of gold foil. Up until this point, it was thought that the atom had a similar structure to plum pudding. Negatively charged electrons were suspended in a positively charged matrix, and it was expected that the alpha particles would just zip through the atom, like a bullet through a cake.

But things didn't turn out this way.

What happened was that most of the particles did indeed travel right through, as if nothing was there. But...a few of the particles were deflected at an angle, and some of them simply bounced back, as if bouncing off a brick wall!

This is not the place for another of my boring science lectures, but I'm simply trying to illustrate how we do our best to infer what the hidden looks like, even if we can't see it. Which leads me to one way to look at Obama's recent decisions on the prosecution of the war in Afghanistan. I am reticent to do this, knowing I might be on the wrong side of an issue many of my friends I respect feel deeply about. But, since I've never been that smart about keeping my mouth shut, I'm going to try and explain why I continue to support Obama, and give him the benefit of the doubt, even as so many on the left despair.

Many people have a general distrust of all politicians, and for some valid reasons. Congress members and Senators cannot expect to get re-elected to continue doing the 'people's work' unless they get up every morning and raise tens of thousands of dollars in re-election funds. All that money probably doesn't come with unconditional love. As we've seen lately in the health care debate, the GOP is essentially a wholly-owned subsidiary of trans-national corporations, and many Democrats are in pretty deep too. How else do you explain the public's support for a public option, while at the same time the Senate seems so willing to kill it? Most of them are bought and sold, that much seems true. But without meaningful campaign finance reform, how likely are any significant changes? I'm totally opposed to term limits, as all that does is weaken the public's representatives compared to the lobbyists, who never get termed out, and just get stronger and stronger.

I've also heard lots of people complain about plumbers, and how much money they make. Do you really want to hire a gardener to fix your broken toilet? In San Francisco, we elected a mayor, Frank Jordan, whose shtick was that he wasn't a politician, and that's exactly what we got. A politician that knew nothing about the plumbing of the political machinery, and we had to live through it. If you lived in California the last 40 years, you had to live through 16 years of Ronald Reagan, whose charm was also being cast outside of the normal politician mold, first as Governor, then as President. What a national tragedy.

So it turns out Obama is a politician. What a surprise. Anyone who thinks they can just drop into the job of President, and instantly turn the ship of state on a dime will be disappointed. The entrenched power interests who fight Obama at every turn are venal and corrupt beyond belief. Out here in commie-pinko San Francisco, we don't live around such cretins as Senator James "no such thing as global warming" Inhofe, and all those other cult members of "The Family" who live in the house on C Street.

The euphoria over Obama's election was short-lived, once it became apparent that the right wingers would not roll over, and would fight tooth and nail, and lie, anything to blunt Obama's pull with the American people. Even with 60 Senators, every piece of legislation is WWIII.

So, what's the deal with Afghanistan? There's only supposed to be about 100 al-Qaeda in that fractured country. The Karzai government is corrupt, and the civilians there don't seem to appreciate having Predators drop bombs on them. We need 30,000 more troops for that?

So, what does this have to do with alpha particles?

Today, Obama gave a speech in acceptance of the Nobel Peace Prize. In many ways, he sounded themes George W. Bush might have mined, but did it in a real, complex way:

I face the world as it is

This is reality. I think what's hidden is what's in Pakistan. Pakistan has nukes. Pakistan has al-Qaeda, probably bin Laden too. The government of Pakistan is anything but stable, and will not officially allow US troops to press al-Qaeda there. Currently the CIA, with those mercenary contractors, is in charge of what goes on in Pakistan, but now it seems like the Air Force is also involved. The real story is in Pakistan, but it cannot be viewed or acknowledged directly.

Obama is straddling the dangers of the world, with the quest for peace. Most politicians give us an either/or fantasy. This is hard.

For the moment, I'm still thinking Obama is playing chess, while the rest of us are playing checkers. But I'm still proud that an American President shares these kind of words with the world:

Let us reach for the world that ought to be -- that spark of the divine that still stirs within each of our souls.

Somewhere today, in the here and now, in the world as it is, a soldier sees he's outgunned, but stands firm to keep the peace. Somewhere today, in this world, a young protestor awaits the brutality of her government, but has the courage to march on. Somewhere today, a mother facing punishing poverty still takes the time to teach her child, scrapes together what few coins she has to send that child to school -- because she believes that a cruel world still has a place for that child's dreams.