Here is what Trump tweeted:


"After consultation with my Generals and military experts, please be advised that the United States Government will not accept or allow Transgender individuals to serve in any capacity in the U.S. Military," Trump said in a series of tweets. "Our military must be focused on decisive and overwhelming victory and cannot be burdened with the tremendous medical costs and disruption that transgender in the military would entail."

Besides the shock of how cruel Trump is, and is probably just laying out more distractions to keep our attentions away from Russiagate, et. al., it occurrs to me it's also probably just illegal. What if his tweet went something like this:


"After consultation with my Generals and military experts, please be advised that the United States Government will not accept or allow African American individuals to serve in any capacity in the U.S. Military," Trump said in a series of tweets. "Our military must be focused on decisive and overwhelming victory and cannot be burdened with the tremendous medical costs and disruption that African Americans in the military would entail."

It would not be difficult to say that perhaps it costs more to treat sickle cell anemia in the African American population. It has been estimated that the medical costs of transgender are not really that significant. Just because Trump is the Commander in Chief, that doesn't give him the right to break the law. We would not stand for him banning black Americans, why should we help him in throwing our transgender brothers and sisters under the bus?
Posted by Geoff Gould at 7/27/2017 12:09:00 PM No comments:

The Death of Empathy 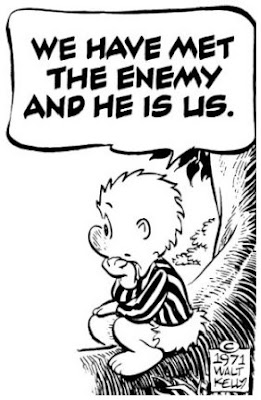 The End of Reason, and Health Insurance

It's always dangerous to think one has an important idea, since we are all so capable of self-delusion.  But I'm going to try to communicate what should be a simple idea, but seems to have so little oxygen in the post-factual era of Trumpland.

Here's the deal: The very idea of insurance has been corrupted.  We have been played so deeply to buy into this American ideal of self-reliance, that we lose sight of caring about those less fortunate, less healthy, less wealthy than we are.  The whole idea of the 'skinny policies' Ted Cruz wants insurance companies to be able to offer, is crazy.  Even the health insurance companies, no angels, agree it's unworkable.

For all its shortcomings, The Affordable Care Act (aka Obamacare) tried to at least define what a real insurance policy is, and tried to get rid of 'junk policies.'  Because of this, right-wingers constantly accuse Obama of lying, for saying "You can keep your doctor."  The implication was simply that "You can keep your doctor, if your health insurance is not a junk policy."  By mandating that all policies have certain minimum standards of coverage, and that all must have insurance, and the rich will help subsidize those that can't afford it,  we have made great strides in lowering the number of uninsured.  But, this is such an evil thing?

So, let me try and finish off my basic point.  We have been fooled into thinking insurance is just healthy people paying too much money for insurance, and those 'other people,' those freeloading sick people, are benefitting from the rest of us.  But insurance is much simpler than that.  We are the sick people, we are the genetically disadvantaged, we are the ones with preexisting conditions. We may be healthy now, but someday we will be those people 'cashing in' on the insurance we paid into earlier when we were healthy.

See? What I've just said is pretty obvious.  So obvious, it shouldn't need to be said.  But, in this 1984 world we've entered, logic is unavailable.

It shouldn't be so hard to see, but in a logic-free world, we've been bamboozled into not caring about "another person's frame of reference," and have nothing to hold on to, save our own solipsism. We are pawns in a game of divide and conquer. Please wake up. We need each other. We need to help each other.