What the hell happened anyway!
A day or two after the election, we were still in shock, driving home on Alemany, near the farmers market.  There was a guy on the median with a cardboard sign asking for money.  Now, I'm one of those people that doesn't give money to panhandlers, I'm not even sure why, and I actually kind of admire people who do, but that's not what we're here to talk about.  We're here to talk about the election.  So, then this guy started yelling at me, telling me I'd give $5 to the panhandler across the street, who was working the traffic in the other direction.  I said no, I wouldn't give him any money either.  He then said yes I would, because the other panhandler was white, and they guy I was talking to was black.  Mind you, this is all happening in just a few seconds, while waiting for the traffic light.  As I started to realize what what going on here, the shock was setting in.  I argued with the guy that it didn't make any difference to me, but he wasn't having any of it.  Now maybe I'm making too much of this; it could just be that this was this guy's shtick to get some more money.  I have no idea.  But what I felt like at that moment was that the horrible election results were tearing us apart.  Here in liberal San Francisco, we were coming apart, not together.

The Blame Game
So it seems like everyone has a theory about what happened.  I think it's way too simplistic.  There's a phrase "The straw that broke the camel's back."  The problem I have with that is it's so unscientific.  When the camel's back breaks, it's from the combined effect of ALL the straws, not any one straw.  In fact, considering the fact that Hillary Clinton won at least 2.9 million more votes than Trump, I'd say the cliché that's most appropriate would be "knocked me over with a feather" instead.  The margin was so thin. It's actually more akin to one of those chaos theory clichés about butterflies and tornadoes.  In short, a strange assortment of factors, and blind luck have put one of the most dangerous candidates into the most powerful office in the world.  Donald Trump, Accidental President!

In no particular order, here are a few of the 'feathers' that knocked us over:

Racism/Sexism
This is more like an undercurrent than an actual event.  Trump gave people the permission to let their Ugly American freak flag fly.  Enough white women stayed in their abusive relationships with the GOP to provide the margin.  But wait, don't stop there.  Muslim-bashing has its benefits too, not to mention the initial scapegoats: Mexicans.  I wrote about The Bradley Effect 8 years ago, and I think the polling was just off enough due to people not admitting they were for Trump.  The polling led to a certain amount of overconfidence.  I mean, there's no way someone as ridiculous as Trump could be elected President, right?

The FBI
Unbelievable.  Caving in to rogue agents inside the FBI and other GOP agents, FBI Director Comey released a non-statement 11 days before the election, in defiance of long-standing policy, as well as laws that forbid members of the government from messing with elections that close to the date, that maybe, just maybe, there might be some new emails to look at.  Many think this might be the biggest factor, but it's hard to say.

The Media
Yes, we can certainly count #FoxNews as a factor, but that's not news.  They always take the most hair-brained side, if it's against the Dems.  But the other media sites, even including #MSNBC (I watch too much) were suckered into giving Trump billion$ in free press.  Any time he happened to give one of his free-association word salad stump speeches, the networks ate it up, like it was real news.  Trump even started bragging about all the free press he was getting, even while vilifying the media at every rally.  Click on this graph of news coverage (so you can see the detail) , from digby's blog: 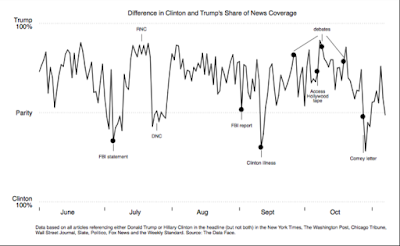 The media was mesmerized by the whole reality TV show that was Donald Trump.  Before anyone could spend enough time to really dig into the most recent gaffe/scandal/outrage, Trump would hit us with another gaffe/scandal/outrage.  This had the effect of constantly distracting the media from anything deep, with the latest superficial outrage.  Even now, after the election, Trump misdirects by talking about burning American flags, to keep us from focusing on the cabal at Trump Tower.

The Russians
In the time I have been working on this blog, more and more has come out about the Russians trying to hack the election.   This is potentially the most shocking story, but hard to prove the exact amount of effects.  What seems clear is that Putin wanted to help Trump, and hurt Clinton.  The Intelligence community tried to tell us this earlier.   On Oct. 7, the Department of Homeland Security and Office of the Director of National Intelligence issued a joint statement on behalf of the U.S. Intelligence Community. The USIC is made up of 16 agencies, in addition to the Office of the Director of National Intelligence.  But, October 7th was the same date of the release of the infamous Hollywood Access tapes.  What do you think American TV viewers would rather focus on?  Russian cyberhacking, or Trump admitting to sexual assault, in graphic, crude language?   The short attention span wins again.

Fake News
Something that has increasingly come to light since the election was the effect of fake news.  Most of the fake news stories (and by fake, we mean the entire story is fake!) were aimed at Trump supporters.  This was mainly because they were more gullible, not necessarily that the people creating the fakes cared about Trump.  Many of the videos came from a small town in Macedonia.  Mixed in with this random fakery were fake news stories promulgated by the Russians to sew more discord.

Voter Suppression
This is probably one of the biggest reasons, but is not getting the press most of the other reasons get.   There has been news about the states' efforts to restrict voting rights since the Supreme Court gutted the Voting Rights Act a few years ago.  What is less reported is the use of the Interstate Voter Registration Crosscheck Program, where a database of voting names is shared between states.  You say your name is James Brown?  Well, it looks like James Brown already voted in Virginia!  We're going to throw your name out so you can't vote at all.  This system threw massive amounts of minority voters off the rolls, even though that kind of voter fraud has been shown again and again to be almost non-existent.  We're talking large enough numbers to change the outcome of states like Wisconsin, for example.

So...
These are just a few of the reasons, none of which have anything to do with the issues, or what's important to the American middle class.  I'd really like to have your comments on this.  Vote for your most important factor, or mention some obvious ones I missed.  In the meantime, God help us all for the next 4 years!
Posted by Geoff Gould at 12/18/2016 11:46:00 PM 8 comments: