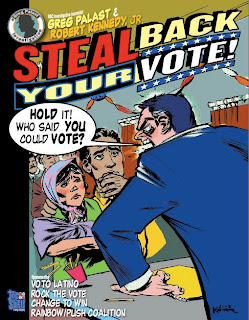 Nothing to see here! Hey, look at that ACORN!
As the end looms, and the smoke clears, the GOP strategy seems clear. It doesn't seem like anyone on the Democratic side is taking a victory for granted, but McPalin's outlook is pretty bleak right now. So, from what I'm hearing and reading, the last strategy is outright stealing the election by reverting to 18th and 19th century voter suppression strategies.

The Repugnicans have been screaming bloody murder about voter fraud, trying to get everyone talking about ACORN, but the true cases of voter fraud are rarer than lottery winners. This is all just a smokescreen to distract people from what is happening across the country, all in the perverted name of the Help America Vote Act. Just like in Florida in 2000, several states are thinning out the voter rolls, and often more likely in poor and ethnic areas. According to the Steal Back Your Vote comic book, co-written by Robert Kennedy, Jr. and Greg Palast, Republican lawyers across the country are challenging and intimidating voters. In their recent article in Rolling Stone, they wrote:

On Super Tuesday, one in nine Democrats who tried to cast ballots in New Mexico found their names missing from the registration lists.

A lot of voters are being challenged because their records don't match on the Drivers License database with the Social Security data. I was called to jury duty twice in one year, just because one list had my name spelled differently than another list. Maybe I won't be able to vote either! I just ran across this story about how certain Florida counties are refusing to go along with the real strict hassling of voters. This is out there to be paid attention to.

This has to bubble up to the top of the media consciousness soon, before it's too late. Please pass the word about this strategy. Enormous sunlight needs to shine into these dark ugly corners, if we are to preserve our democracy.
Posted by Geoff Gould at 10/27/2008 09:01:00 PM 1 comment:

according to the ABC caption:

A Stake Through The Heart

Hunting for Vampires
OK, so I got this weird image/fantasy about the change this country could go through. It seems like lately the McCain/Palin beast has been all too willing to summon the dark demons of fear and prejudice in in their naked drive to keep the Cheneys of this world in power. I feel like the promise of an Obama presidency is so enticing, and will be such a positive step for this country, but these demons need to be quelled. My hope is that enough people will wake up in time to 'drive a stake through the heart' of this darkness, and will stay vigilant after the election to make sure it doesn't happen again.

The moment Bill Clinton was sworn in, he was under attack by these same forces. Just how much more could he have accomplished if he didn't have 'that weakness?' Can a President Obama summon the kind of unity needed to transform this country into what it could be? That's why we need to keep these demons in check, to not let them out of the box ever again. Yeah, yeah, dream on Geoff.

One of the reasons I like Star Trek so much is that it presents a world where the decision has been made to leave institutionalized poverty behind, forever. It still exists on other worlds, but humans have left it all behind. Can we ever unite to such an extent? It seems unlikely in the face of so much entrenched self-interest, but hey...

Donna Brazile Is Not Going To The Back Of The Bus

My friend Jeff Johnson forwarded this video from Donna Brazile that hits the nail on the head. I wanted those of you who aren't already on Jeff's list to see it too. This comes at the end of an 80-minute panel, and Donna just launches into this wonderful ad-lib. This is incredibly timely, considering the incredibly facsistic, racist rallies that Palin and McCain were whipping into frenzies on Monday. Donna's comments were this weekend, before the ugly incidents. 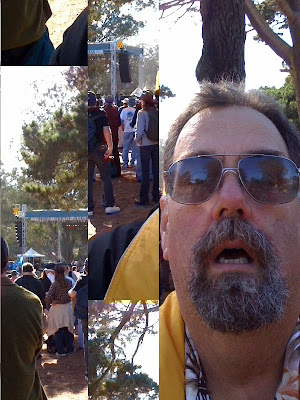 Saturday in Golden Gate Park
I slept most of the morning, while Martha was away at a Peace Corps conference, and decided that now that the sun had come out, maybe I'd get on my bike, and head over to the Hardly Strictly Bluegrass festival, which has become such a huge annual affair in Golden Gate Park.

Once I got to the park, it was somewhat uphill, and even though I'm in better shape now, I was sure breathing hard on my way past the buffalo, and on to the western border gate of the festival. There were so many people, bike riders were asked to walk their bikes, so my ride turned into a walk. I could hear the sweet pedal steel of the Desert Rose Band, playing on the Star Stage. When I got close enough, I tried to take my picture, with the stage in the background. Now and then, my iPhone camera gets its brain scrambled when taking a picture, and it seemed somewhat fitting I should get this chopped-up image of me still huffing and puffing!

I headed farther into the park to the Rooster Stage, and caught the very last songs of Nick Lowe. Before I got close enough to see, I could hear a solo acoustic guitar singing "I Knew the Bride When She Used to Rock and Roll," one of Nick's classics. I was hoping that maybe Elvis Costello would join him at the end and sing "(What's So Funny 'Bout) Peace, Love, and Understanding," a Nick Lowe song most famously done by Elvis. Elvis wasn't in the building, but my wishes were granted anyway, as Nick closed his set with a slower, tasty solo acoustic version. That was worth the bike ride right there!

At this point, I walked my bike (very slowly; walking a bike through a huge crowd is not so easy!) over to the Arrow Stage, where Jerry Jeff Walker was playing. Heard some nice tunes, such as the pretty Navajo Rug, Up Against the Wall Redneck Mother, and heard LA Freeway as I headed back home. Kind of nice to have these lyrics stuck in my head as I left the vicinity for the ride home: 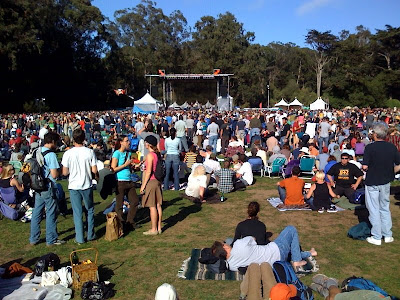