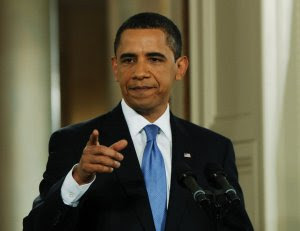 Might as well, Mighty Swell...
Tonight, President Obama gave a prime time news conference on his 100th day in office, and everyone seems to want to give him a grade. As a teacher, who has seen front line action in the grade inflation wars, you'd have to give him at least a B+, and probably higher, but it's too early to tell, so it's just a progress report.

To be honest, compared to the presidents since JFK, and I really wasn't that aware of government policies at 10 years old, this guy is a freakin' A+! He's sharp, concise, and thoughtful, and going for it full tilt.

I'm unfortunately a little scared of the crazies being whipped into a frenzy by Fox News, and I sure hope the Secret Service is doing their job. I think America is too invested into this one person, and if we should lose him, it would be difficult to go on with the same energy.

I would like to say a word about the "torture thing." I know there are many on the left who are unhappy he's not actively trying to put Dick Cheney in prison, and seemingly uninterested in prosecuting anyone for the abuses of the past administration. I heard a phrase on the Stephanie Miller show, which I usually catch a few minutes of in the morning on the way to work, where she says "Obama's playing chess, while the rest of us are playing checkers."

I think he cannot allow himself to be seen as spending any energy gunning for the crooks from the previous administration, but the wheels of justice are grinding away, and I could see an unavoidable, inexorable collision ahead where some of the crooks will pay.

So, I think he's doing great, and as long as we don't all perish in an H1N1 pandemic, I look forward to a brighter future for once!

Forgive us our pleasures...

Sure, the state of the world is on my mind, and I hope you all are thinking about it too. But...it's a beautiful Spring Day in San Francisco, and while I was mowing the lawn, I thought about all these flowers screaming for attention! So, let's give the little prima donnas their moment in the spotlight, and vote for your favorite colored flower, somehow surviving in my backyard!

Orange Nasturtium
I think these plants are weeds, Martha does not.

Cala Lily
These have been popping up since February; how long do they last?

Geraniums with pink highlights
I think these are weeds too, but pretty right now.

Geraniums with purple highlights
I like these better than the pink ones, don't you?

Flowering purple iceplant
Cameras can't quite catch the psychedelic essence of this color. It probably has some sort of natural fluorescence to bring it out so bright.

So, there you have it. Vote for your favorite color!

Here's a link to the photo gallery of the flowers