Enough!
I'm sick to freakin' death of the underlying text of what passes for politics in this so-called Greatest Country on Earth. The news media simultaneously reports that many white voters think blacks are "too lazy, violent, and responsible for their own troubles." At the same time we hear some people think Obama is too elitist, too priviledged, too refined.

We hear whispers about how he's really a radical Muslim, while hearing about his so-called racist black Christian pastor.

Make up your freakin' mind!

I'm sick of basically getting the idea that America is "not ready" for a black president, while of course having to put up with comments about how he's not black enough. I don't feel like waiting. I've waited long enough. 8 years is more than enough. How's NOW work for you?

From Robbie Robertson's song What About Now:

Did you see the march to freedom
Did you ever see savannah moon
All the people walking in a line
Said to the man, is it my time?

Fox in the Henhouse

Wall Street Worries
Sure, there are probably people who shouldn't have been given home loans, and no, government shouldn't always be the solution for bad judgement, but the latest fiscal crisis is so much more than just a few bad loans to people in no position to repay them. There has been a massive deregulation of the finance industry by the same folks who have brought us privatization of almost everything.

Now, people by the score are losing their homes, their jobs, and their dreams, and all the government can do is defend executive compensation for CEO's of bankrupt firms? And oh, by the way, in case one is not that good with powers of ten, the $700 billion price tag is on a par with the cost of the Iraq war. So, it's not like I don't want the government helping us out, I mean, that's what government should be doing, right? But...do I trust the current regime with that many zeroes? I just don't have that kind of faith. 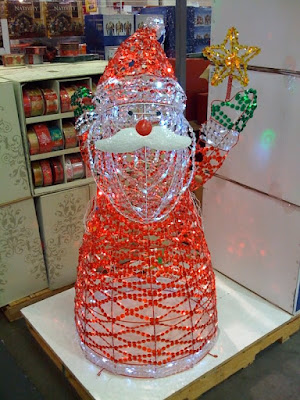 Winter Wonder Phobia?
If you know me, you know I'm a corny guy when it comes to Christmas. I like looking at gawdy xmas light displays, I enjoy watching It's a Wonderful Life, and I love endlessly listening to the Phil Spector Xmas album. But yesterday, while I was at Costco, and it's not even October yet, the sight of this Santa display freaked me out!

Talking about how early they commercialize Christmas is nothing new, and of course we all know Costco is simply putting things out in advance of the season, but it still freaked me out! Am I being unreasonable?
Posted by Geoff Gould at 9/21/2008 02:47:00 PM 2 comments:

Irony Indeed!
After years of making lots of noise (after all, one of my screen names is basstooloud!) it's only fitting that this should happen to me. I offered to host the guitar jam club for another teacher after school today, and this guitar army descended on my classroom.

This clip is 22 seconds long. Imagine an hour of this! 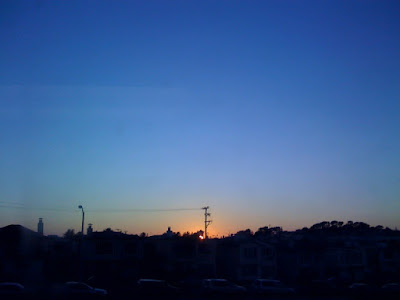 Break-fast dinner with the Muslim Student Union
Tonight we had the pleasure of sharing a meal with Muslim and non-Muslim coworkers and students at the school I work at. We were invited to share this meal during the month of Ramadan, where practicing Muslims fast from sunrise to sunset for an entire month. It was a simple gathering, the first time I had attended such an event. In what was a cosmic coincidence, it was a beautiful clear sunset in the land of Daly City, where fog rules most of the time!
We were treated to a tasty meal, and all had a good time.
One woman spoke briefly about the event, and how it brings one closer to God, and also how it brings awareness of other people around the world who do not have enough to eat.
I share this event with you mainly to see if anyone else has attended such a meal before.
Posted by Geoff Gould at 9/17/2008 10:31:00 PM 1 comment:

Lucy in the Sky 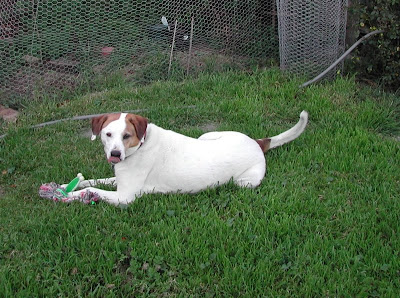 Lucy 1992-2008
Today has been a very sad day. We've known for a while that our 16+ year old foxhound Lucy was nearing the end. Intellectually, I know she was a pet, an animal, and not a human, but that doesn't make it very easy to find the right time to say it's time. We took her to the vet today to go through it together, and I miss her. She was a loved one indeed. Looking through pictures afterwards, I could see her presence woven through fabric of our lives, changing as we changed.
Posted by Geoff Gould at 9/06/2008 01:57:00 PM 2 comments:

Gag Me With a Spoon 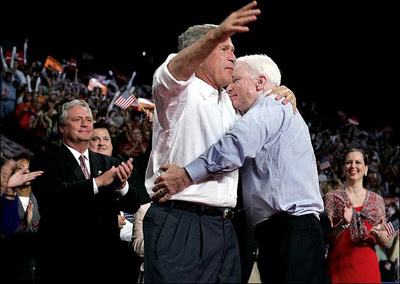 I watched a little bit of the Repugnican convention tonight, and tried not to yell at the TV too much. There sure were a lot of white people at the convention, telling us proudly they were putting "Country First." It is clearer more now than ever that this campaign will rarely stray into the field of reality; lies will be told, big lies, and lots of them.

The GOP is revving up its putting down of the "Mainstream Media" at the same time that said media is brown-nosing its way through its coverage. Reality distortion indeed. I could only take so much of Fred Thompson's classic serving up of 'red meat' to the assembled multitudes, and went out for a bike ride. When I got back Joe Lieberman, ex VP candidate from 2000, was shilling for McCain. Ugh.