It's All a Dream We Dreamed One Afternoon, Long Ago 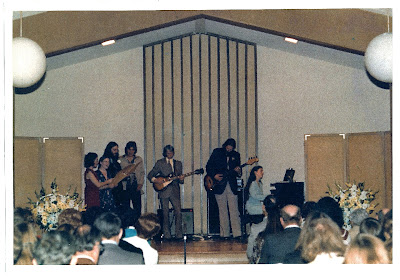 Since our daughter Grace's wedding, people ask me how it feels. I don't quite know what to say. Certainly Grace and Peter have been together for years, so there's no change in location. Mainly I felt swept up in the moment, and felt very blessed to be alive, and dancing (somewhat clumsily) at my daughter's wedding. There were regrets that our parents (both dads gone, and our moms not well enough to attend) couldn't be there, but the heavens smiled, the weather was perfect, and who can beat redwood trees for a natural setting?

I have been thinking about our own wedding, at the Los Gatos History Club on the Winter Solstice of 1975, and just looked at our photo album for the first time in years. The colors are fading a bit from the prints, and there are many faces in the pictures no longer with us. In the picture above (we were playing "Attics of My Life") David and Chris (3rd and 5th from the left) left us way too young.

Not to make too fine a point of it, this is indeed a passage, even if there are no major changes on either side of the time demarcation.
And now for the T. S. Eliot I didn't quote at the wedding:


I sometimes wonder if that is what Krishna meant—
Among other things—or one way of putting the same thing:
That the future is a faded song, a Royal Rose or a lavender spray
Of wistful regret for those who are not yet here to regret,
Pressed between yellow leaves of a book that has never been opened.
And the way up is the way down, the way forward is the way back.
You cannot face it steadily, but this thing is sure,
That time is no healer: the patient is no longer here.
When the train starts, and the passengers are settled
To fruit, periodicals and business letters
(And those who saw them off have left the platform)
Their faces relax from grief into relief,
To the sleepy rhythm of a hundred hours.
Fare forward, travellers! not escaping from the past
Into different lives, or into any future;
You are not the same people who left that station
Or who will arrive at any terminus,
While the narrowing rails slide together behind you;
And on the deck of the drumming liner
Watching the furrow that widens behind you,
You shall not think 'the past is finished'
Or 'the future is before us'.
At nightfall, in the rigging and the aerial,
Is a voice descanting (though not to the ear,
The murmuring shell of time, and not in any language)
'Fare forward, you who think that you are voyaging;
You are not those who saw the harbour
Receding, or those who will disembark.
Here between the hither and the farther shore
While time is withdrawn, consider the future
And the past with an equal mind. 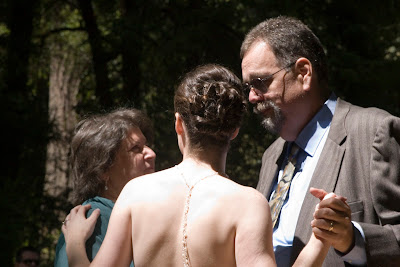 Usually on Father's Day, I force my kids to play golf with me, or in Jesse's case, since he refuses to ever play golf again, he caddies for me. Everyone groaned about the forced indignity, but I'm under the illusion we generally had a good time. 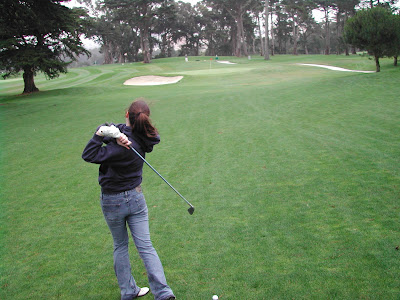 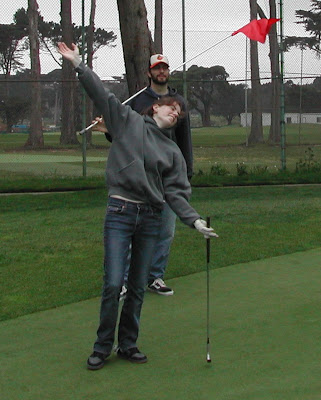 Sonja celebrates while Jesse waits
This year, I will be celebrating Father's Day by attending my daughter Grace's wedding. It's not the same as playing golf, but I suspect it will be OK. They're going to let me speak at the ceremony (highly irregular!) as long as I don't give too much advice, and I think I can do that.

So my dad, who passed away in '95, will not be there for the wedding, and I'm sure there will be bittersweet moments, as these types of events are prone to provide. This brings me to a dream I had recently of my father, and I'd like to share it, even if I don't quite understand it.

About a week or so ago, I was napping post-breakfast (one of my totally favorite things!) and was having some sort of vivid cinematic dream. At one point, I realized that the man next to me, who I think was wearing a plaid shirt and who I don't remember talking to, was my father. As the awareness came to me that I was dreaming and wanting to savor the moment, I tried to speak to him, but he quickly receded into the distance, down to a small stick figure. As I watched him disappear into the far away hills, even this much contact evaporated, as I was pulled back into consciousness, unwillingly.

Perhaps this is a very normal dream, maybe about not realizing what you have until it's gone. I'll leave the analysis to the professionals, but I do treasure moments like this, even if they don't really 'exist' in our so-called real world. 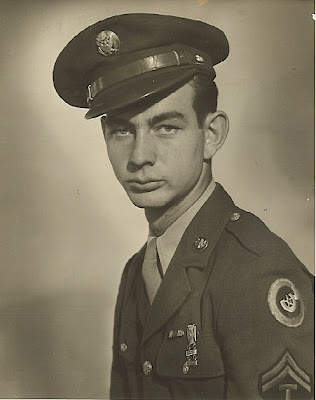 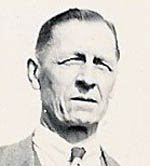