Just How Crazy Is It?

Should We Arm Bears?

Just to show you how out of touch I am with what I am told are ordinary patriotic Americans, I wanted to spend a little of my blog space to comment on the current "Open Carry" movement.

Lately these people have been wandering into coffee shops, with permitted holstered weapons, as they order their mochas.

Yeah, I guess it's legal, but when I see someone with a gun in the open, even a cop who's there to protect the public, I get a little nervous. I get very nervous when I see right-wingers showing up at public demonstrations packing heat.

This summer, some nutcases famously displayed their weapons very near an event that Obama was at. If you go to the open carry website, they actually point to that as an example of how twisted the gun-control crowd is!:

"The anti-gun rights lobby's furor over the presence of guns
near the president . . . is an attempt to somehow reverse the normalization of guns."
Professor Brandon Denning, Cumberland School of Law (Birmingham, AL),
Christian Science Monitor, August 8, 2009

I don't have much more to say, but I don't want to hang out in a coffee shop where some insecure, overcompensating dude is showing off his new Glock!

The Search for Reality

I think many of us are battle-weary about the health care debate. I would guess this is partly due to our modern lack of an attention span, but it has also been the result of a deliberate stalling strategy that defies reason and believability, and yet it continues to work. I never realized before this last year how incredibly broken our American system of health insurance was, at least for most of us. You might notice I didn't use the term health care, as the care itself is way down on the list of priorities. It's not that the insurance companies are evil just for evil's sake; after all, it's "just business."

It's only logical that a business must do whatever it can to make a profit. That is the nature of business, and the law of survival. So, of course a for-profit insurance model would use the following tactics to maximize a high rate of return:

Deny coverage for pre-existing conditions.
Drop coverage as soon as possible for people that need to actually use it.
Raise rates as much as possible.

Especially if you can manipulate a non-competitive environment.

This is simply what you would expect in a system designed to protect the concept of profit in a world where health is needed.

And this is simply what the fight is all about. All the talk about cost containment, 'government-run' healthcare, 'death panels,' and fraud is just a smoke screen. It is purely and simply a struggle to maintain a system unlike any other developed country.

The fact that we treat health care as a sacrosanct source of profit, instead of a human right is the problem. Don't be distracted away from that. Just try to imagine what kind of world it would be like if your local fire department was run like a for-profit health insurance company: Your house is on fire, but if you can't pay COD, too bad for you.

There are so many lies around, I made an effort to find just a couple of facts I could confirm at the source. I didn't want to quote some political web site. I think if you can hang on to just these two things, it would put the issues in perspective.
First, let's put the magnitude of the crisis in perspective.

The world was aghast when 3,000 people were killed on 9/11. Over 5300 Americans service men and women have died in the wars in Iraq and Afghanistan since they began, to say nothing of the civilian casualties.

OK, have we all absorbed that? Well here's something I think we should never forget:

Nearly 45,000 annual deaths are associated with lack of health insurance

Maybe you've heard this before, but perhaps it just fades into all the other screaming about the issues of the day. This is not something the Huffington Post invented. This was a study conducted by the Harvard Medical School.

Here is a link to the Harvard site

Don't let anyone tell you this is a made-up number.
45,000 people a year.
Is that enough to notice?

Let's move on to the money.

Putting aside the obvious morality of just declaring access to health care a right, let's quit talking about how we can't afford it.

According to an article I found written in September 2004 from the Brookings Institute, well before Obama entered the race. At that point in time, there were "$1.7 trillion of revenue losses already locked into law."

There has basically been a campaign to cast modern progressive taxation as "Socialism.' And you thought Joe McCarthy was dead!

We are letting people die just so rich people can get a couple of extra percentage points off their income tax.

These four models should be fairly easy for Americans to understand because we have elements of all of them in our fragmented national health care apparatus. When it comes to treating veterans, we're Britain or Cuba. For Americans over the age of 65 on Medicare, we're Canada. For working Americans who get insurance on the job, we're Germany.

For the 15 percent of the population who have no health insurance, the United States is Cambodia or Burkina Faso or rural India, with access to a doctor available if you can pay the bill out-of-pocket at the time of treatment or if you're sick enough to be admitted to the emergency ward at the public hospital.

The United States is unlike every other country because it maintains so many separate systems for separate classes of people. All the other countries have settled on one model for everybody. This is much simpler than the U.S. system; it's fairer and cheaper, too. 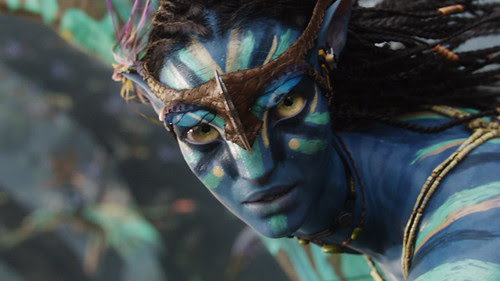 If there are any of you left who haven't seen Avatar yet, let me just offer a few words of advice:

It may not be the most thrilling plot you've ever encountered in a movie theater, but this is the reason you go to movie theaters, and not 'just wait for the DVD.' I have heard the plot described as Dances With Wolves with blue people. I never saw that movie, but I get the joke. I tend to watch Star Trek TNG reruns every weeknight at 10 for the same reason; good film or video should take you some place. Avatar definitely takes you to another place. It is money well spent as far as I'm concerned.

I haven't seen it in 2D, and I'm sure it's still pretty cool, but the total immersion experience of 3D just really puts this experience over the edge. These aren't just cheesy effects either.

Prepare? To see a movie?

I didn't know much about the movie outside of the basic plot. I usually like to see a movie before it gets ruined by modern day teasers and trailers which seem to spoil all the good parts! I'm not saying you need to attend a language class to speak the Na'vi language, but I would at least recommend you see the trailer that has been produced which includes background material. The main Apple trailer page for Avatar is a good place to start. I wish I had seen the trailer listed as "Experience the World of Pandora" before I'd seen the movie. The 'Featurette' is a short primer on Pandora, and some basic facts about the world you'll be spending over two hours inhabiting!

Go to the bathroom before the movie! At 162 minutes, try not to buy the big soda before you go inside!