Does Pat Robertson Speak for Bush?

I was aghast, and swearing at the TV recently when I saw Pat Robertson on TV, praying that God would smite down another Supreme Court Justice, so that his holiness, George II, could appoint yet another Supreme. Here is one of America's leading televangelists, who should have been run out of town on a rail, but we only hear about it on The Daily Show. I guess it wasn't 'news' enough for the MSM. In case you don't hang around right-wing blogs, MSM is the term the righties use for the MainStream Media. The funny thing is that they always assume the MSM is a tool of the left. I'm not sure what planet they live on, or what rules of logic they use, but I don't see much left-leaning from my point-of-view. I think in general, if you don't parrot Karl Rove's talking points, you're some kind of commie!

I'm getting a little off-course here, which brings me to Pat's latest flip-out, a call for assassinating the president of Venezuela:

"We have the ability to take him out, and I think the time has come that we exercise that ability...We don't need another $200 billion war to get rid of one, you know, strong-arm dictator," he continued. "It's a whole lot easier to have some of the covert operatives do the job and then get it over with."

And then, in an incredible display of what must be an extreme blend of tactlessness, cluelessness, and blind greed, said this:

"You know, I don't know about this doctrine of assassination, but if he thinks we're trying to assassinate him, I think that we really ought to go ahead and do it,...It's a whole lot cheaper than starting a war ... and I don't think any oil shipments will stop."

It will be interesting to see just how hard, if at all, the Bush regime comes down on Pat. This will probably be a good litmus test of just how far above the law the right wing thinks it can go. Pay attention to this one. I will find it hard to believe Georgie won't try and distance himself from this nutjob, but I've been wrong before about this kind of thing.
Posted by Geoff Gould at 8/23/2005 11:30:00 PM No comments:

Yes, they'll even do it to a grieving mother

Perhaps you've already seen the news reports of the mother camped out near George W. Bush's Crawford ranch, trying to meet with our fearless leader. The picture on the left is actually when she was at a Pentagon protest in January 2005. I somehow doubt she'll get an audience with his highness, and rumors tonight are already flying about how she'll be arrested on Thursday, perhaps as a threat to National Security. Cindy Sheehan's son Casey died during an April mission in Sadr City, Iraq.

Enter, again, the right-wing blogosphere. It seems that today, the slimeball offensive is in full gear. That lovable vulture Matt Drudge published an error-filled article on the morning of August 8, and within hours was being parroted on the major right-wing blogs. The next day Bill O'Reilly piled on, saying that "she is in bed with the radical left."

This shouldn't be all that earth-shattering, but the reason I'm bringing it up is that the excellent organization, Media Matters for America, has laid out this shoddy mudslinging in a detailed article. I don't think many will find this interesting, but if you've heard someone spout off about about how this mother is a flip-flopper who just wants publicity, read the mediamatters.org article, and you'll be able to shoot them down with impunity!

The dark side of blogging

As you know by now, anyone can blog, look at me! But blogging can be used for ill purposes, not just these silly ego-tripping essays. I am a fan of Air America Radio, and subscribe to a Google news clipping service that sends me links when there are news items that feature Air America. Most of it is pretty harmless, but lately I noticed a lot of links to right-wing blogs talking about how AAR was stealing money from homeless kids, etc., and when I looked into it, it seemed like they were just twisting some facts to fit the headlines. Finally this evening, I saw a link that dealt with all this concerted blogging slime. It seems that Fox News (suprise) had joined the slime patrol, and I found this article to be very educational:

If you'r curious, I recommend checking it out. It includes another link to an article about how one person tried to investigate what this was all about, only to find a lot of lies:

How to Fake News: A Primer

Meanwhile, Back to the Ranch... 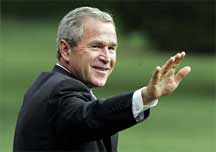 Just a short rant ahead. I've already written about creationism vs. evolution, what else would you expect from a science geek with a blog, so this isn't new. But just last night, I was checking the headlines at news.google.com (my favorite place to stay connected) and started yelling at my laptop!

It seems George W. Bush was headed back to his Crawford Ranch for about the 50th time since he's been president (there's a whole story there!) and was having a White House roundtable discussion with some Texas journalists, when he said he thought the theory of Intelligent Design should be taught alongside evolution. Here's a brief excerpt from a New York Times article that sums up what he said:

In an interview at the White House on Monday with a group of Texas newspaper reporters, Bush appeared to endorse the push by many of his conservative Christian supporters to give intelligent design equal treatment with the theory of evolution in public schools.

Recalling his days as Texas governor, Bush said in the interview, according to a transcript, "I felt like both sides ought to be properly taught. " Asked again by a reporter whether he believed that both sides in the debate between evolution and intelligent design should be taught in the schools, Bush replied that he did, "so people can understand what the debate is about."

Bush was pressed as to whether he accepted the view that intelligent design was an alternative to evolution, but he did not directly answer. "I think that part of education is to expose people to different schools of thought," he said, adding that "you're asking me whether or not people ought to be exposed to different ideas, and the answer is yes."

I am definitely having trouble with a world where people can claim to be having a debate, but can't even agree on the rules of reality! There is no debate in the scientific world. ID (Intelligent Design) has no standing as a real scientific theory, but Bush and his right-wing Christian wacko accomplices think that just by sleight of hand, and a few well-placed phrases, they can elevate ID as a worthy parallel to be 'debated' alongside evolution.

My head has been reeling from all the other stuff he's been stirring up, and along with everything else, tries to score more points for the forces of Orwellian logic.

In what could be seen as a desperate attempt to muddle the public mind concerning important issues, George W. Bush continues to practice the policies of distraction, perhaps thinking he's some sort of Jedi Knight, and can just wave his hands, as if to say "There's nothing to see here, this isn't the smoking gun you're looking for!"

So, after a shameful attempt at forcing John Bolton down the Senate's throat as W's boy at the UN, Bolton has been simply appointed, utilizing the legal "recess appointment" powers allowed a president. Other presidents have made these kinds of appointments, Clinton for example, but from what I've read, never has a UN ambassador been appointed this way before. Bush thinks Bolton will clean up the UN, perhaps like we've cleaned up Iraq.

The Stealth Supreme Court Justice
In a move that appears to simultaneously divert attention from the traitors in the White House, and avoid serious opposition to his tipping the Supreme Court even farther to the right, Bush picks a conservative who can't even admit to being a Federalist, and thinks the endangered species act should not apply when the extinction only occurs in a single state. He also has a very short history of even being a judge. In short, since just about everyone agrees he's brilliant, has little judicial history to judge him on, and not a pederast, he's a shoe-in. And he's only in his fifties, so this choice will probably not get rolled back (assuming the Democrats can ever get the Senate back) for another twenty years or so.

Whatever happened to the news about Traitor Turd Blossom?
It looks like we've forgotten about him too. I sure hope the grand jury hasn't. From almost any perspective, Karl Rove has sacrificed national security, for political payback. Whether he actually broke some narrowly defined law is not the point. Unless special prosecutor Patrick Fitzgerald is on the take, or Karl has incriminating photos of him with farm animals, I suspect Karl will eventually feel the heat. The White House press corps, a group of overpaid lap dogs if there ever was one, was just starting to grow a spine, which led to Bush nominating Roberts ahead of schedule, gettting Rove off the front page.

It's an amazing world, ain't it? This all looks so transparent, yet Bush is still President, and Karl Rove, not to mention Robert Novak, is still out of jail!

I guess the hopeful way of looking at all this juggling, is that eventually, even the best jugglers get tired, make a mistake, and the whole shebang crashes to the stage floor. The mid-term elections are coming, and already there is talk about bringing some troops home before then. This, after Rumsfeld says it may take a dozen years to get out of Iraq!

Keep on spinning them plates Georgie!