Very few people actually read my rants, just a few friends I notify now and then, so I guess I mainly write for me. Sometimes I write for people like me who were totally unaware of really big things, until the elephant comes into view. Then, wow, how come I didn't know before?
I was recently sent a link to an excellent speech by Bill Moyers, on receiving Harvard Med's Global Environment Citizen Award. It was an excellent speech, and I think most of you know Bill Moyers is truly one of the good guys in the world of TV journalism. His series with Joseph Campbell, The Power of Myth, is one of the best things ever seen, and has a deep and lasting effect on me.

One of the most interesting observations Bill makes is that many of the people who don't care about the environment are quite aware they are harming it, but since they are going to be called soon to the Rapture, it doesn't really matter. I had never heard of the Rapture Index before, but yes, it's real. Actually, it seems like one of those fake news sites, where someone is pretending to be really serious about a topic, but the tongue is always firmly in cheek. Not so this time. There are some pretty funny pages about guessing who the antichrist is, but it's funny to me, not sure how funny it is to the 'true believers.' The New Covenant Christian Ministries has a page, full of flow charts and diagrams showing different scenarios about when the true believers will fly into the air, the unworthy going to hell, the length of the 'tribulation, ' and the final scene, the "New Heavens and New Earth."

Apparently, a huge number of Americans believe in some form of Rapture dogma, and this alone I found quite disconcerting. The worldwide scourge of fundamentalism is clearly not limited to Islam. In America, we have a large movement, some very close to the seat of power in the White House, who are looking forward to the end of the world.

Just the other day, at the Christmas Pageant at our church, someone read these lines from Isaiah:

"Every valley shall be exalted, and every mountain and hill shall be made low: and the crooked shall be made straight, and the rough places plain: And the glory of the Lord shall be revealed, and all flesh shall see it together: for the mouth of the Lord has spoken it."

Now, I don't normally quote the Bible, I'm pretty Bible-illiterate, but the reason I bring this up relates to the concept of taking the Bible as literal truth. Does anyone really believe that the valleys and the mountains will end up at the same elevation? Is the earth destined to be smooth as a marble? Of course not. This is clearly allegorical prose. What a drab world we would live in, if there was no allegory, no allusions, only literal statements of verifiable fact. Then why do people try to force literal sense out of one of the most clearly hallucinatory (I don't mean that in a bad way!) books of the Bible, Revelations?

So, all I'm trying to say here is that there are lots of people walking around today who believe in the literal version of the Rapture, as told to them by others of course, and you might be surprised to find out who these people are. You might even be related to them.
Posted by Geoff Gould at 12/22/2004 02:17:00 PM 1 comment:

Give Me a Break!
There is a phony movement going on, being played up at Fox News, which seems to be gaining traction, even among people who wouldn't ordinarily buy the swill they sell.
Stories are floating around about how people are saying "Happy Holidays" more now than "Merry Christmas." I'm hearing about a lack of Christmas music at shopping malls. It sounds eerily familiar, kind of like what I seem to hear every Halloween.

Every Halloween, I hear stories about poisoned candy, the apochryphal "razorblades in apples" and so on. The intent of all these stories is to paint a picture of the decay of modern civilization, and how unsafe things are compared to the "good old days." What a load. I have been hearing about how bad Halloween is since I was a little kid. I don't think things are any worse now than they were in the 1950's; they're probably safer. We're all just a lot more terrified, and scared to death these days. It helps keep us under control.

The Christian Right is emboldened by the fact that many of Bush's cronies are fundamentalists, and they have given themselves credit for winning an election that I'm not even sure was counted fairly. From what I hear, it seems like they are no more active than before, but they have an increasingly powerful propaganda machine with Fox News. Bill O'Reilly has been harping about how Christianity is under attack, giving it sort of an underdog status.

Jesus is no underdog in America. If anything, there have been more calls lately to turn away from a pluralistic society, where the minority is protected from the tyranny of the majority, and turn America into some sort of theocratic Christian state.

Just like Halloween, this is so bogus. I can't recall a time when "Season's Greetings" and "Happy Holidays" haven't been on many of the Christmas cards I've received. What the hell is wrong with not wanting to send a "Merry Christmas" card, especially one of those with heavily religious overtones and graphics, to a friend who you didn't know was Jewish? To tell you the truth, I think there's too much religion in Christmas these days!

One of the watershed moments I remember is when an old friend who had gone 'fundy' sent us a Christmas card, full of all sorts of religious stuff, and some text about stopping the murder of innocent fetuses by abortion. Just what I wanted to read during the holidays!

This season, a group of right wing Jesus freaks is trying to boycott Macy's over some rumor that employees there have been told to say "Happy Holidays" instead of "Merry Christmas." In North Carolina, a church recently took out full-page newspaper advertisements urging the faithful to patronize shops that include Merry Christmas in ads and displays. That's right, the holier-than-thou crowd has officially linked shopping to Jesus. This is a proper and pious thing? 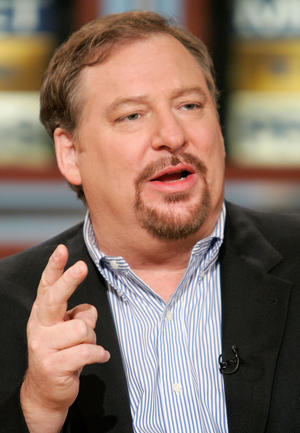 Rick Warren is the best-selling author of Purpose Driven Life and pastor of one of the largest protestant churches in the US, the Saddleback Church in Lake Forest, California, which has a weekly attendance of 16,000 people!
In an earlier post, I wondered about how the Christian vote was mobilized, since it surprised many of us. In a strange burst of synchronicity, I think I found myself staring at one of the answers last Sunday. As I have mentioned before, I usually attend an adult discussion class at my church on Sundays, and we have some good, often quite tangential discussions, ostensibly centered around some book. We were just wrapping up a good 5-week discussion of the Tao Te Ching, when I noticed a book across the table in front of the group leader. It was Rick Warren's 'The Purpose Driven Life.'

I had recognized his name from years earlier, when a previous pastor asked me to listen to a cassette tape Rick Warren made about church growth and management. What I remember most from that tape was hearing the phrase "It's easier to ask forgiveness than ask permission" numerous times. The idea was to just start doing new things at church, and not go through channels. I began to hear this phrase over and over again through the years, and it seems to be the new age Christian equivalent to Machievelli's 'might makes right' concept.

Rick has apparently bottled what modern Americans are looking for in a religion. The main theme in the opening chapters of his book (hey, the PDF's are free! I'm not going to buy the whole thing!) keep talking about how you have nothing to do with choosing your purpose in life, God has already done it for you. How convenient! No messy soul-searching required. God has it all covered.

Now, I'm not going to spend a lot of time talking about his book. What's become obvious here is that Rick Warren has become one of the most influential people in America. Just do a Google search on 'Rick Warren politics' and you'll see how 'He has counseled Hollywood celebrities, Wall Street power brokers, and has been a guest in the George W. Bush White House.' You'll find a Christian investment in diamonds, inspired by Rick Warren. Rick is very casual, often preaches in a Hawaiian shirt, and is apparently quite a nice guy. It's not an exaggeration to say that when Rick Warren talks, people listen. Millions of Evangelicals are primed and ready to do whatever God tells them to do. Of course, they need someone to actually tell them what God is saying, and that's where Rick Warren comes in.

In a column written shortly before the election in the Baptist Press web site, Rick writes "As church leaders, we know our congregations are not allowed to endorse specific candidates," which simply means he doesn't want his mega-church to lose its tax-exempt status, but then he goes on to say this:

"But for those of us who accept the Bible as God's Word and know that God has a unique, sovereign purpose for every life, I believe there are five issues that are non-negotiable. To me, they’re not even debatable because God's Word is clear on these issues. In order to live a purpose-driven life -- to affirm what God has clearly stated about His purpose for every person He creates -- we must take a stand by finding out what the candidates believe about these five issues, and then vote accordingly.

Here are five questions to ask when considering who to vote for in this election:

1. What does each candidate believe about abortion and protecting the lives of unborn children?

2. What does each candidate believe about using unborn babies for stem cell harvesting?

3. What does each candidate believe about homosexual “marriage”?

4. What does each candidate believe about human cloning?

5. What does each candidate believe about euthanasia -- the killing of the elderly and the invalids?"

This has got to be right up there in the Transparently Disingenuous Hall of Fame. For someone that claims to not endorse a candidate, this guy (someone pastors look to for guidance) sent this letter to thousands of churches. There can be no doubt that God (as revealed to Rick Warren) wants George Bush to select the next few Supreme Court justices.

Clearly one of the most influential men in America wants to roll back a woman's right to choose, take rights away from tax-paying gay couples, and stand in the way of medical progress, and all this is directly, without debate, from the mouth of God. What is important here is that Rick Warren no longer be allowed to act invisible, more invisible than Karl Rove.

In closing, if you find this interesting, check out this sermon, from a UMC minister, in response to Rick Warren's letter. It's nice to know that not all Christians check their minds at the door, and it might be good to have some logical ammo, the next time an Evangelical tells you how thankful he is that George W. Bush is our president.
Posted by Geoff Gould at 12/01/2004 01:15:00 AM 3 comments: