As you can see by my lack of writing activity since the election, I've been trying to make sense of what happened, and feel I will have something to write real soon. But...in the meantime, I'd like for you to read this excellent article by Byron Williams.

We'll talk some more about this soon!

I would like to call your attention to a wonderfully written, deliciously vicious and vulgar opinion piece about the red state/blue state dynamics. For the sake of our more tender readers, I caution you in advance. If you don't like seeing swear words in print, go no further! 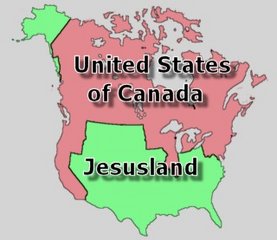 I started this blog talking about Bush and Kerry, I think I need to mark this point in time, to look back as we move forward.

So, how did this happen?

Karl Rove and the 'values' rope-a-dope
My first feeling upon hearing that lots of churches mobilized voters to come out and smite the homosexuals at the ballot box was pretty depressing. I mean, here we are, melting the glaciers at an alarming rate, pissing the large majority of the world off with our escapade in Iraq, and generally spending our grandchildren's inheritance on this wild orgy, and all people care about is trying to avoid the sight of two men kissing? Are people are so mean-spirited that they waited in the rain in Ohio to vote against gay marriage, and hey, while we're here, let's just give the W chimp another four years to play with? At the very least, you have to hand it to Karl Rove, the modern day Goebbels, who distracted Kerry with the Swift Boat liars, while all along they have been working to bring out the evangelical vote. I don't like it when my own church gets involved in a specific election issue, and here it seems it's been going on nationwide. Color me clueless I guess. I would like to find out more about this effort, and will share more later if I find anything useful.
Was the vote stolen?
Many people offhandedly dismiss this point of view as paranoid rantings from the tin foil hat set. I can be accused of being under the mind-control rays of radio flamethrowers like Randi Rhodes, but I have seen many interesting articles about the black box voting in the Diebold machines, and I would suggest anyone interested to spend a little time looking into this. blackboxvoting.org is a major source of info, and is actually mounting a Freedom of Information campaign to uncover hard facts about the 2004 election. It is their position that fraud took place in 2004 via the voting machines. Another great resource is Common Dreams, a great nexus for well-written articles by established writers about progressive issues. I feel a little let down that the Democrats are not following through on the vote fraud issues; they pledged to make sure every vote would be counted. Even if Bush wins fair and square, let's make sure it was done on the up and up. Our citizens need to feel like they have a voice.

Does King George really have a Mandate?

There is no sea of "red states" in this country. Every state had a significant number of Kerry votes (well, except maybe for Utah!) and a better map shows the shade of purple for each state, based on the actual vote counts. Before the body of the 2004 election was even cold, George W was talking about spending his political capital, like he did in 2000. Considering he didn't even win the popular vote in 2000, that takes a lot of chutzpah to claim political capital while losing the popular vote! This is spin on a massive level. Out of one side of his mouth, he takes credit for getting the most votes of any President in history. Of course, the fact that the number two vote getter of all time is John Kerry seems to be glossed over. What needs to happen now it to mobilize the poplulation to resist turning back the clock a half-century. I have already seen the Fox News talking heads talking about how the losers cannot expect any concilliation in their direction, it's up to the losers to reach out in George W Bush's direction.
Four More Years Starts Now!
We cannot allow this president to appoint reactionary Supreme Court justices. Politics must not sleep for another four years. The resistance starts now!

I have re-discovered an old song lately, written by Terry Callier (via HP Lovecraft) called "It's About Time":


Well it's about time for the rising sun
It's about time yeah, that the deed was done.
Whoa a better day's a comin', that's a thing I know.
You and me brother, we can make it so.


I tend to follow my instincts about music, and for some reason this song has grabbed me lately. I first heard it on HP Lovecraft II from 1968. The song is practically buried in psychedelic wretched excess, but the vocals come through like a lighthouse, with a sense of gospel urgency. I just found it on CD, and started searching around for the lyrics. HP Lovecraft was a vocal-heavy rock combo out of Chicago, with a taste for trippy sounds; kind of like choir boys on acid. A little more research revealed that the song was written by a friend of the band, Terry Callier. Terry is a black folk/jazz/blues singer, a contemporary of the great Curtis Mayfield. I finally tracked down the original tune, from 1965. Terry was quite young then, but with a soul beyond his years.

Tonight is November 1, 2004, the night before the election. There is no more time left before what could be one of the most important decisions this country may make. I have heard of people making plans to move to Canada if Bush is re-elected, and there is a certain life-or-death urgency about it all. I keep wondering how I will cope if Bush wins. What I think this all comes down to is how we interact with Time.

Time is long, and life is short. Subconsciously, we all hope that while we're alive, we will see society achieve that plateau of perfection, the ultimate goal of our evolution. Kind of like on Star Trek, where the races get along, poverty has been eliminated, and utopia reigns, at least inside our local star system.

When Terry Callier sang "It's about time yeah, that the deed was done" was he thinking of 1965? 1966? 1970? As we sit here almost 40 years later, does it make him look like he was wrong? We have a tendency to smirk at utopians, at their foolishness. But I feel that recognizing good and evil, and taking a stand, lives apart from whether the time is actually coming for the ultimate triumph.

Even if George Bush and his neoconservative criminal cronies may indeed hang on to power another four years, that proves nothing. Taking a stand against injustice is putting your hands on the wheel of Love, and giving it a turn. We will not always see the fruits of our labors, but we must have faith that doing good, and opposing evil, must inexorably lead us on right path. I don't mean to hedge my bets here; I think Kerry has a great shot at a definitive win, but we must not wilt away if victory is snatched from the people again.

Perhaps it's a little ironic that the song ends with "make it so." This is one of the more famous lines delivered by Captain Picard of the Starship Enterprise, always with a hand gesture, moving forward.

When the path is clear, why should we be afraid to "make it so?"

****
Notes:
Music Links:
HP Lovecraft CD
New Folk Sound of Terry Callier
About the Boondocks comic strip (below)
After I had completely written my blog entry, I noticed the following comic strip, due to be printed the next day. I couldn't believe the serendipity at work here!
At the time, I wasn't sure what "C. P. Time" was, so I asked around, and found it refers to "Colored People Time," which is somewhat more flexible than Greenwich Mean Time.